PHOTO: Matt Hendricks Does The Splits On Dennis Wideman's Goal

Share All sharing options for: PHOTO: Matt Hendricks Does The Splits On Dennis Wideman's Goal

Goals, schmoles. There has been a lot of them in the Washington Capitals' game against the Tampa Bay Lightning, so you could argue that each individual one isn't remarkable. That said, the one that involved Matt Hendricks in the first period was pretty cool.

Hendricks didn't even score the goal; instead, defensemen Dennis Wideman did. But it wouldn't have happened if not for Hendricks doing a full split in midair to confuse Lightning goalie Dwayne Roloson and let Wideman's shot whiz by him. Video of the goal, via CSN Washington, is below the jump. A photo of the split, which is pretty cool if I say so myself, is also below the jump. 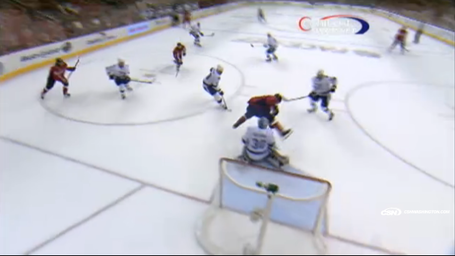 Lightning Vs. Capitals: Tomas Vokoun Steps Up Late As Capitals Win, 6-5, In Shootout