VIDEO: Jay Beagle Gets Knocked Out By Arron Asham (UPDATED)

Share All sharing options for: VIDEO: Jay Beagle Gets Knocked Out By Arron Asham (UPDATED)

Warning: this video is not for the faint of heart. This is Washington Capitals forward Jay Beagle trying to make a name for himself against Pittsburgh Penguins bruiser Arron Asham and failing miserably. Beagle got a couple punches in, but then Asham dropped the hammer with one huge punch.

The initial video below only shows the fight itself, but the worst part was when the CSN Washington camera (UPDATE: that video is below the jump) showed Beagle bleeding like crazy on the ice. It remains unclear whether the punch or Beagle's visor caused the bleeding, but either way, it was not a pretty sight.

The fight originally happened when Beagle took a penalty on Kris Letang. Asham came over to fight Beagle, and Beagle really had no choice. Video (via @TPBDerek), plus Asham's taunting afterwards, is below the jump.

UPDATE: CSN Washington also added a video that shows the bleeding and Beagle pulling out his own tooth. Both are below the jump.

UPDATE: Here's a GIF of the celebration as well, via @TPBAdam. 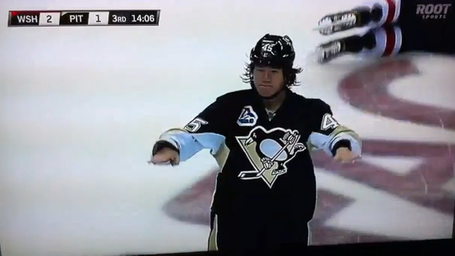 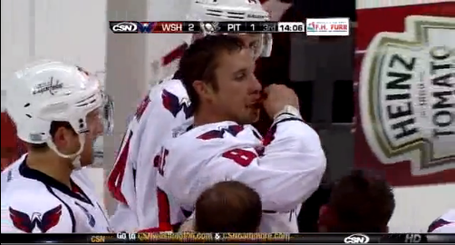 We'll have more updates about Thursday's game in this StoryStream. Remember to visit Japers' Rink and SB Nation D.C. for complete Capitals coverage. Pensburgh and SB Nation Pittsburgh offer the perspective from the Penguins' side.