Share All sharing options for: PHOTO: Alex Ovechkin With His Wax Statue

The unveiling of Alex Ovechkin's wax statue at Madame Tussauds finally happened on Monday, a couple weeks after it was going to happen. The ceremony was delayed when Ovechkin's uncle passed away, as Ovechkin returned to Moscow to tend to his family. Now, it has finally happened, and here's the end result. See if you can tell which Ovechkin is real and which one is a statue. 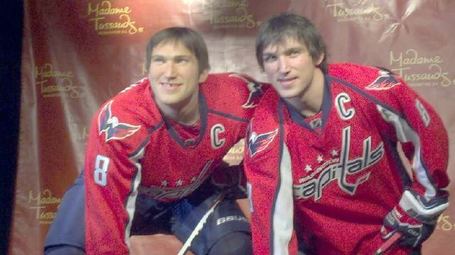