Alex Ovechkin, Nicklas Backstrom May Dress Up As Dumb And Dumber for Halloween

Share All sharing options for: Alex Ovechkin, Nicklas Backstrom May Dress Up As Dumb And Dumber for Halloween

Halloween is right around the corner, so it's the time of year when people start to ask athletes how they plan on dressing up for the occasion. It's a fun question to ask when the beat gets too drudgery, and it's a good way for teams to make their players seem more personable.

So it only makes sense that Alex Ovechkin was asked about his Halloween costume during the unveiling of his wax statue at Madame Tuussauds on Monday. His answer comes at the 4:20 mark of this video.

Hmm ... does Ovechkin really look like Jim Carey in that movie? You be the judge. Seems like there is a bit of a resemblance. 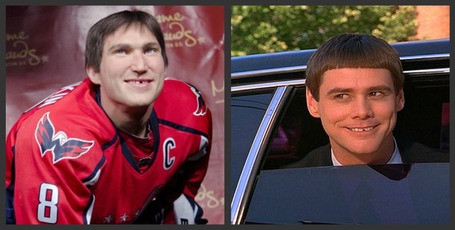 UPDATE: Oops, that's the very realistic Ovechkin wax statue on the left, not Ovechkin. Here's one of Ovechkin himself. 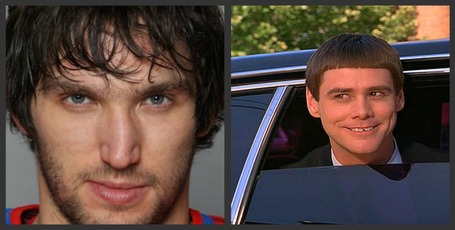 Shave the beard, straighten the hair, and Ovechkin could pull it off pretty easily.