Share All sharing options for: PHOTO: Capitals Players Hang Out With Dana White At UFC Live 6

We know that Washington Capitals defensemen John Carlson is a big MMA fan, so the idea of him being in the stands at UFC Live 6 at the Verizon Center on Saturday isn't a huge surprise. Apparently, though, he brought three of his teammates with him. Below the jump is a photo of Carlson, Mathieu Perreault, Cody Eakin and D.J. King hanging out with UFC commissioner Dana White. 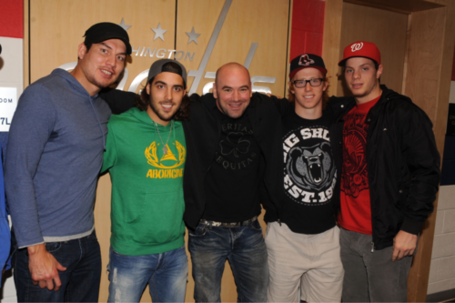