The New Jersey Devils lead the Washington Capitals after the first period of play at the Prudential Center in downtown Newark. The Devils opened the scoring when Adam Larsson netted the first goal of his career at 13:06 in the first. Larsson was assisted by Dainius Zubrus, playing in his 1,000 game as a pro, and Patrik Elias.

For Caps fans, the first period marked the return of defenseman Mike Green after sitting out for six games. But the oft-injured defenseman encountered more problems right away. It appeared Green was re-injured after a collision with Ryan Carter of the Devils. Green's right leg was caught awkwardly on the boards and he was forced to leave the ice. Green started the second period on the bench, and was testing his right leg for just two shifts on the ice but went back in the tunnel. A picture of the Carter hit on Green is below.

We will have more on Green's status as the night progresses and the Caps look to break a two game losing streak in Jersey. 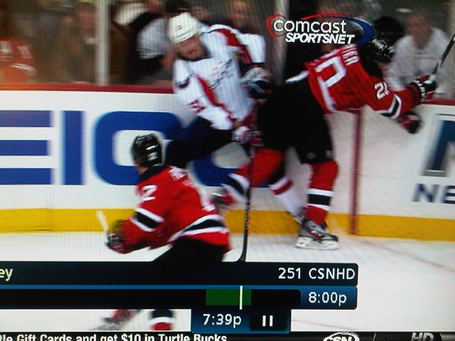 Capitals Vs. Devils: Washington Back On Track With 3-1 Win Over New Jersey