Share All sharing options for: Karl Alzner Wants Michael Buble To Come To A Caps Game

Despite being cultured, classy international gentlemen of fortune and leisure, we have to cop to never actually hearing a Michael Buble song in our lives. We do know that the Canadian crooner loves hockey (he recently practiced with the Vancouver Canucks and spoke about Bruce Boudreau's firing on D.C.'s NBC station) and shares a hometown with Caps defenseman Karl Alzner (Burnaby, British Columbia, to be exact).

So perhaps it wasn't surprising that the genial Alzner put out the bat signal to his followers via Twitter earlier today. 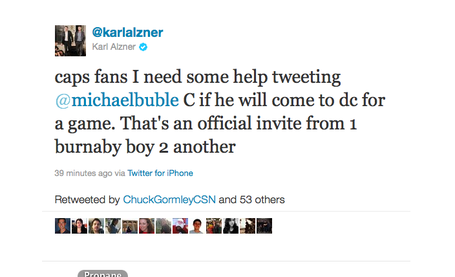 If we're reading Buble's website right, he won't be very busy through the beginning of March, when he starts a world tour. So we see no reason why he shouldn't take in a game at the Phone at some point. After all, it's not like the Caps haven't had minor celebrities in their locker room before.