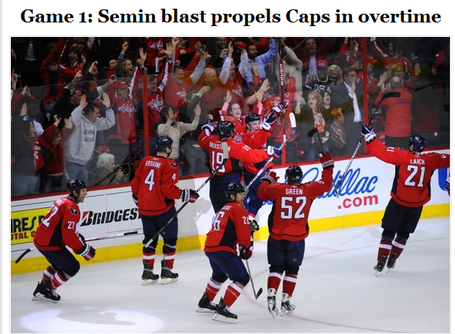 Because we're immature, we're going to poke fun at two things regarding Alexander Semin's game-winning goal to beat the Rangers in the first game of a best-of-seven quarterfinal series in the 2011 NHL Playoffs.

The first is that headline, via the Washington Post. "Semin blast?" C'mon Post editors, you were waiting to use that headline all season, right? If you weren't, you'd use a phrase like "Semin slap shot" or "Semin rocket" (OK, maybe not) or even just "Semin goal." Right? But no, you had to use the phrase "Semin blast," just to get us immature bloggers going. Can't you see we can't act like adults here?

The second is Alex Ovechkin's reaction to the goal. Listen closely to his post-game interview with CSN's Al Koken, which you can find here. Fast forward to the second question, when Koken asks Ovechkin if he saw his game-tying goal. Ovi's answer:

Yup, he's using Semin's pun-worthy nickname as 20,000 people at the Verizon Center listened on the jumbotron. And everyone says we're the immature ones.

(photo of the Washington Post headline is via Mister Irrelevant)

UPDATE: It's possible Ovechkin was instead saying "Semin, uh, just goes and puts his arms up. Decide for yourself below the jump.

UPDATE: Former Capitals PR man Nate Ewell says it was definitely "just." So there you go.