A short while ago, the only thing Capitals fans could talk about is how much they hated their team. Their Capitals trailed 3-0, and the talk was about how dumb Bruce Boudreau was to rile up the Madison Square Garden crowd. Boy, what a difference a few minutes makes. This goal by Marcus Johansson tied the game at 3, completing a stunning third-period comeback and eventually sending the game into overtime.

The goal came just after a power play that Alex Ovechkin drew. The power play ended, but the Capitals worked it around to John Carlson, who blasted it into the back of the net. On second glance, it was Johansson who tipped in the puck, getting his second goal of the game and providing a very clear breakout performance. He also scored on a tip-in to cut the Capitals' deficit to 3-2. 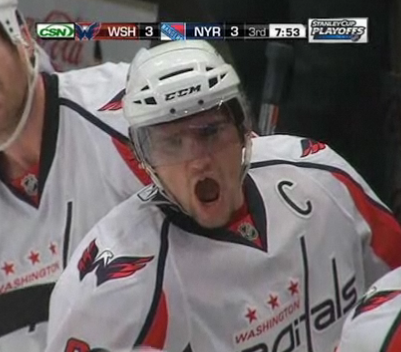