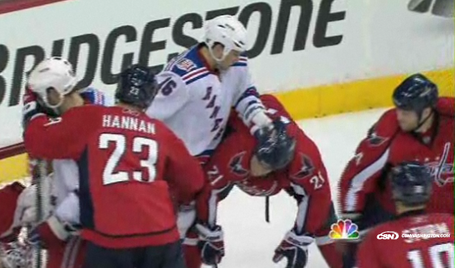 As if Capitals fans needed more of a reason to hate Sean Avery, he provided more reason for ire midway through the second period. After a scrum in front of Michal Neuvirth, Avery sought out Brooks Laich and tried to fight him in the crease.

It's still a bit unclear how the whole thing began or what was said during the incident, but there's unmistakable evidence there that Avery tried to jam his fingers on Laich's head. Afterwards, Avery claimed to the referees that Laich "f***** bit me." I can't say I saw that one, and Avery isn't exactly the most credible person in the world, so ... yeah, I'm not sure where that leaves us. (Laich, for his part, said Avery jammed fingers in his mouth).

The good news is that this whole thing led to an outstanding chant of "Avery sucks," which is probably something most fans in the NHL would like to chant. Video below the jump.

Rangers Vs. Capitals: Washington Wins Game 5, 3-1, Advances To Second Round