It's been a busy week for Capitals star Alexander Ovechkin. Fist he had a quick photo-op with the First Lady, Michelle Obama. But now, he and his Capitals teammates may have met an even bigger star, or two. Here is a picture of Ovechkin and some of his Capitals teammates with Lil' Wayne and Drake from their concert on Saturday, via Russian Machine Never Breaks. 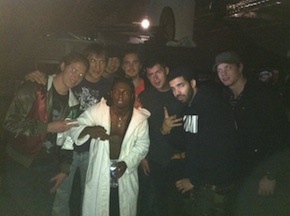 From left to right, Nicklas Backstrom, D.J. King, Lil' Wayne, Marcus Johansson, Mike Green, Drake and John Carlson. Click through the jump for another, possibly even better, photo and why we love to see this kind of thing. 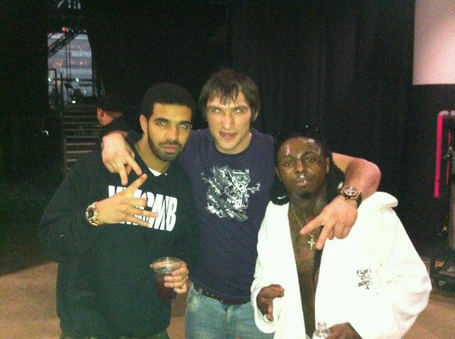 First off, why am I not surprised to see Wayne so shiny and wearing what appears to be a bath robe?

But seeing stuff like this is why we love Ovechkin. He is a big star in his own right, yet he loves taking these pictures with famous people. He has as much fun doing that sort of thing as any of us would. It's like the little dance he did after scoring the game-winner the other night. He's having just as much fun being Alex Ovechkin as we would if we were in his shoes.