Share All sharing options for: Capitals Goal Wiped Away Due To Too Many Men On Ice Penalty 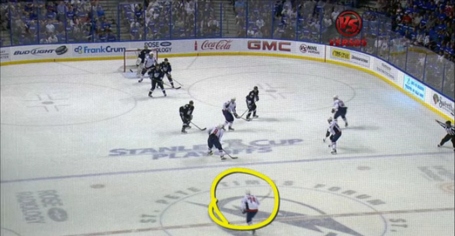 Game 3 of the Capitals' 2011 NHL Playoff second-round series couldn't have gotten off to a worse start. The Capitals appeared to have banged home a goal past Dwayne Roloson for a 1-0 lead in the first period. It wasn't called initially, but it was about to be reviewed, and a replay showed that it did indeed go past Roloson before the whistle blew.

There was only one problem. As you can see in this Versus screenshot, the Capitals had six men on the ice. The man circled is John Carlson, who seemingly was the guy that shouldn't have been there. On the replay, the referees noticed the goal, but also noticed the penalty. Therefore, not only did the Capitals not get a goal, but they had to go shorthanded too.

As far as bad line changes go, it's not nearly as damaging as the one that caused Vincent Lecavalier's game-winning goal in Game 2, but it's still pretty awful. Video of the whole exchange can be found below, via CSN Washington.