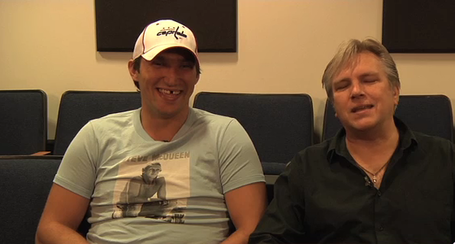 Alex Ovechkin returned from his summer adventures in Turkey, Moscow and other places to do an interview with Mike Vogel of WashingtonCapitals.com. During the interview, Vogel asked Ovechkin to give his take on the Capitals' busy offseason. In particular, Ovechkin was asked about the signing of goalie Tomas Vokoun. He said he couldn't believe it and actually thought it was a joke at first (emphasis mine).

"Right before the plane, I go to restaurant with my friends. So we're sitting and we're eating," Ovechkin told Vogel. "My friend goes to the Internet, and he said, 'What the hell is going on right now? Capitals sign Tomas Vokoun?' And I say, 'No way. This is a joke.'

"So I start talking, we have a great discussion, [and he's like] 'No, it's unbelievable. You just signed Tomas Vokoun,' he continued. "So I texted a guy who lived in D.C. who said, 'Yeah, it's true.' So all the guys are sitting there, we're so happy. It was just like a bomb in the restaurant. It was unbelievable when you sign that kind of goalie. It's nice he's on our team and not a different team, because it's really hard to play against him."

Ovechkin also touched on the rest of the Capitals' offseason, saying it shows the team is "here for business and here for winning." He also said he didn't watch the Stanley Cup Finals, choosing instead of unwind before beginning his training this week.