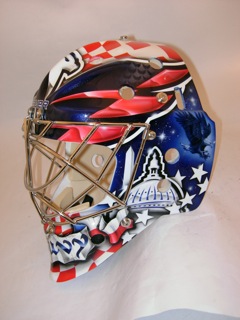 Neuvirth's mask is a vast departure from the one he started the 2010-11 season with. Yet, perhaps the most interesting thing that Gunnarsson mentioned was that despite the photos of Tomas Vokoun's mask that surfaced last week, the new goalie's mask has yet to be released:

He did say that Vokoun prefers a "crisp and clear" look to his mask, so expect it to be very different from Neuvy's.

Regardless, between Neuvirth's new mask and his bright new pads, he will be one of the most stylish goalies in the NHL. Now, if only they gave out an award for that.