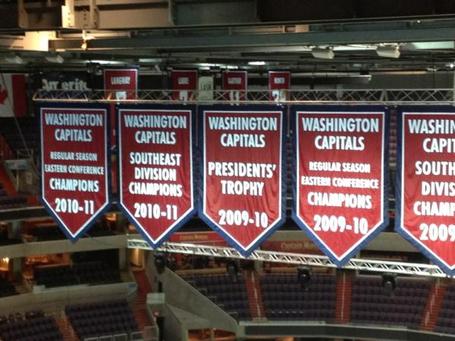 Nope, your eyes aren't deceiving you. Those are two new banners specially added to commemorate the Capitals finishing with the first seed in the Eastern Conference in 2010 and 2011. You know, when they lost in the first round to Montreal and in the second round to Tampa Bay, respectively.

Now, we'll preface this by saying that it's Ted Leonsis' building and he can raise or lower whatever banners he likes. But we'll just point out that many efforts to make a franchise seem more successful than it really is can backfire. Quite the contrary, it can actually make said franchise seem more desperate and pathetic than the reality. Have we so quickly forgotten the lessons of these beauties?

We're admittedly old school about this sort of thing, but if we ran the Verizon Center, we'd adhere to the late Red Auerbach's guidelines for banners: championships only. That means everything comes down except the Bullets' spiffy 1977-78 flag and Georgetown's 1984 NCAA basketball championship banner. Retired numbers can stay, but every other ultimately meaningless piece of cloth can be auctioned off for charity. At least if that were the case, the banners would do some good, instead of serving as a memory of playoff disappointments past.

Islanders Vs. Capitals: Washington Shut Out On Home Ice, 3-0