Capitals Returning To Baltimore For Another Exhibition Game

Share All sharing options for: Capitals Returning To Baltimore For Another Exhibition Game

There's still a long, long way to go, and many, many things to sort out before this becomes official, but it looks like the Washington Capitals are at least toying with the idea of playing an exhibition game in Baltimore for a second straight year.

From the Washington Business Journal:

Ticketmaster had listed Tuesday evening on its website a Sept. 27 game between the Caps and the Columbus Blue Jackets at First Mariner Arena. The game, again billed as the "Baltimore Hockey Classic," was removed Wednesday morning from Ticketmaster's website, just a few hours after a Baltimore Business Journal inquiry to the Capitals.

A screencap of the listing (via the Business Journal) is after the jump. 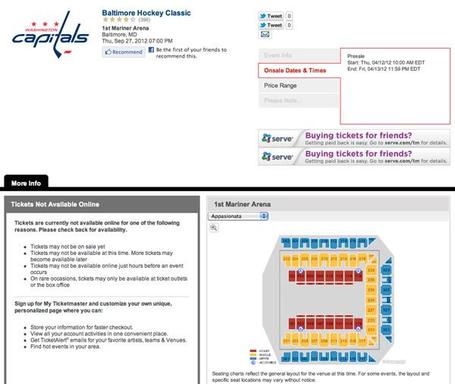 Like we said, there are still quite a few obstacles to clear. Most notably, we still don't know if there will be an NHL Preseason in 2012 due the fact that the current NHL CBA expires on September 15,2012 and, according to this CBC report, negotiations won't begin until after this season.

But if this game does go off as tentatively scheduled, let's hope the ice surface is better than it was for last year's game. You might recall that Bruce Boudreau had a few things to say about it.

UPDATE: Per 106.7's Sky Kerstein has confirmed that the Baltimore Hockey Classic will be scheduled for September 27.

A source confirms the @WBJonline report, September 27th #Caps vs. Columbus will be the Baltimore Hockey Classic at First Mariner