PHOTO: Capitals Give Jay Beagle The Snoopy Dance Treatment After He Scores

Share All sharing options for: PHOTO: Capitals Give Jay Beagle The Snoopy Dance Treatment After He Scores

This season hasn't been an easy one for Capitals forward Jay Beagle. Very early in the season, Beagle was knocked out by Pittsburgh's Arron Asham, who chose that unfortunate moment to show off his best impression of CM Punk.

Beagle missed 31 games as the result of the concussion he suffered in that fight. And if that wasn't bad enough, Beagle's surname has made him the subject of groan-worthy jokes, often of the "Jay Beagle is in the doghouse" variety.

In spite of all this adversity, Beagle's become a fourth-line regular under Dale Hunter, even scoring one of Washington's two regulation goals in their crucial win over Montreal Saturday night. And while we're not sure if this was deliberate on the Capitals' part, the coincidence was too good to miss.

After Beagle's goal made it 2-0 to the Caps, the talented game ops people at Verizon Center so happened to pick out Snoopy's dancing scene from "It's The Easter Beagle, Charlie Brown" for use on the Jumbotron. (Get it? Because Sunday is Easter, you see.) A cute little piece of symmetry as the Capitals hope to chase down the Red Baron that is the Stanley Cup. 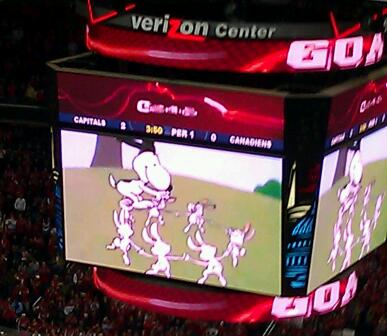