It used to be that when your team won a big game thanks to the heroic performance of one player, you would go out and make signs saying "In [Player Name] We Trust," and [Player Name] For President." If you were really wanton about it, you could go out and deface some property by writing the player's name in graffiti. People don't do that last thing so much anymore. Why would you when you have Wikipedia.

It seems that in the hours after Braden Holtby made 44 saves in Washington's 2-1 victory over the Boston Bruins,a few overzealous fans got their hands on Holtby's Wikipedia page and made a few edit. 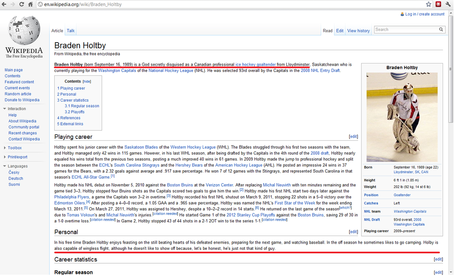 We'll have plenty more on these games and the rest of the 2012 NHL Playoffs on SB Nation D.C., so keep it locked to this StoryStream for all the latest news and updates. For more news, analysis, and discussion on Capitals hockey, please head over to Japers' Rink. For the opponent's perspective all series, check out Stanley Cup of Chowder. You can also head over to the SB Nation NHL hub page for more on hockey news as the playoffs begin