PHOTO: Anguished Capitals Fan Speaks For All Of Us

Share All sharing options for: PHOTO: Anguished Capitals Fan Speaks For All Of Us

We spotlighted this piece by Brian Murphy of Homer McFanboy in our starting lineup, but since the Capitals and Bruins are well on their way to deciding the closest series in Stanley Cup Playoff history with a Game 7 in Boston Wednesday night, it deserves liberal quotation here.

Let me put it this way - when the happiest moment your 37-year-old franchise has to offer is getting swept in the Stanley Cup Finals, you become conditioned to expect the worst whenever the postseason rolls around.

And the last graph:

At this point, I'd love to be wrong. But too many years of rooting for the Capitals have me conditioned to believe this postseason run is not going to end well for Alex Ovechkin and his teammates.

Murphy chose to run an accompanying photo of Karl Alzner caught in a spotlight. We think that he would have been better served to run this photo of a Capitals fan agonizing over Andrew Ference's third-period goal Sunday afternoon. 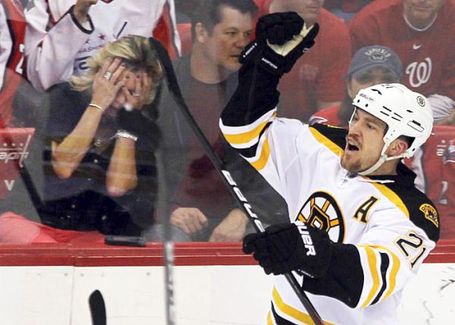 Photo via @si_vault on Twitter. If anyone knows this person, who was still lucky enough to have seats on the glass Sunday, tweet us @sbnationdc.