PHOTO: Capitals Announcer Joe Beninati Gets His Own Hockey Card

Share All sharing options for: PHOTO: Capitals Announcer Joe Beninati Gets His Own Hockey Card

We were born in 1987, on the cusp of the internet era. But like many kids before us, we collected sports cards. Having no idea about classification, we mostly just threw them all into a giant shoebox, taking them out every once in a while to admire one card or another. (For some reason, this Ted Hendricks card remains engraved in our memory.)

We haven't thought about collecting cards in over a decade. But that was before we learned that Capitals play-by-play man Joe Beninati had one of him, courtesy of the Italian company Panini.

The train of thought among those inside Panini: fans of each team would feel a strong connection to their own particular announcer and it would become a must have collectible. "Not only are you collecting the players," [Panini License Acquisitions Manager Alex] Carbajal said." You want to collect every part of the team."

"Really? You want to pay me for my autograph?" Carbajal vividly recalled Beninati saying when he first broached the subject.

Beninati's been doing Caps games since 1994, but considering he spent five years before that riding buses and broadcasting in the American Hockey League, it's hard not to believe his incredulity.

And you'll be happy to know that Beninati looks as dapper on his card as he does in real life. 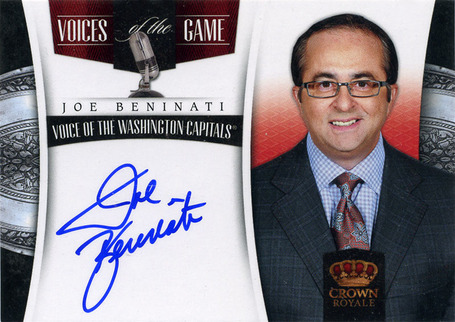