Shortly after the Washington Capitals secured a berth in the Stanley Cup playoffs for the fifth straight season, we tweeted the following, "Wouldn't this be the year, of all years, that the Capitals would make a postseason run? Nothing written yet that says it can't be."

In their four previous playoff appearances, the Caps have held one of the top three seeds in the Eastern Conference, including the No. 1 seed twice, and have nothing to show for it but a pair of second-round exits. Wouldn't it be better to hope for the seventh seed and a matchup with the Bruins (against whom the Caps are 3-1 this season)?

Or maybe we've got this all wrong. Maybe the Capitals just didn't have the right apparel. And by apparel, I mean the shirt you'll see after the jump.

Look at this thing and tell us this isn't the missing piece for a Washington Stanley Cup run. 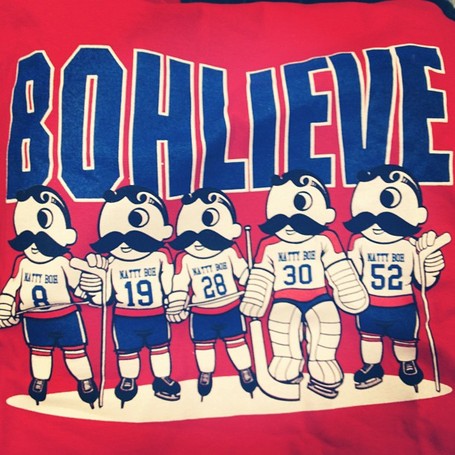