Having worked briefly for a newspaper ourselves, we understand that Game 6 of the Eastern Conference Semifinals would have ended long past the early edition deadlines for most papers.

So we're inclined to give the good people at the New York Post the benefit of the doubt for the headline you're about to see.

Via Bruce Arthur, sports columnist for the National Post of Canada. 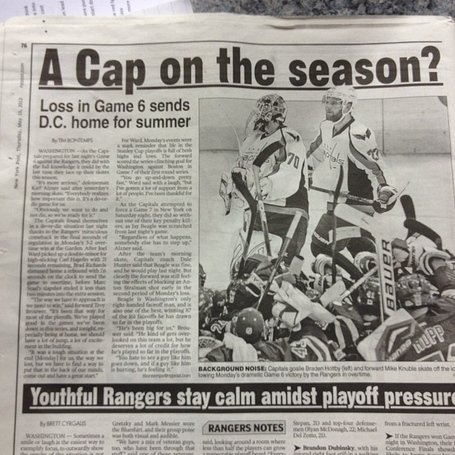 Again, we'll give the Post the benefit of the doubt since this doesn't strike us as a "Dewey Defeats Truman" gaffe. Why, you ask? Note the question mark after the headline, which implies a semblance of doubt. The subhead is missing the word "would," but is still a perfectly reasonable explanation of the stakes of Wednesday night's game.

The photo caption references the Rangers winning Game 6 in overtime instead of Game 5. Well, that's obviously not right, is it? Someone might want to have a word with that sub-editor before the day is out.