Former Capitals player and current Capitals TV analyst Craig Laughlin called his last game of the 2011-12 season a couple of weeks ago when the Capitals knocked out the Boston Bruins in Game 7 of the Eastern Conference Quarterfinals.

As is the case with most hockey players, Laughlin went in for surgery as soon as his playoffs ended, this time to deal with a troublesome hip. While the Caps were playing Game 5 against the Rangers in New York Monday night, the beloved analyst tweeted out this photo of himself in his hospital bed.

Even hip surgery can't stop me from rockin the red! GO #CAPS! yfrog.com/oe7iegzj 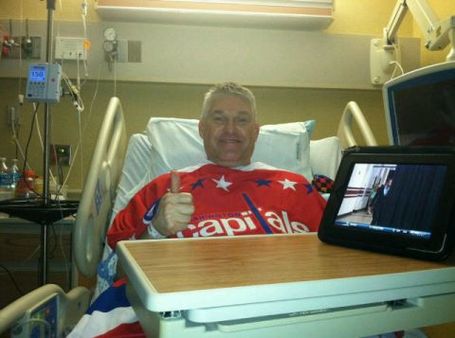 We wish Locker all the best, and we look forward to seeing him back in his blue suede shoes (we're not kidding, he was wearing a pair before Game 3 of the Boston series) at the Verizon Center very soon.