So, once again Capitals General Manager George McPhee hired a man with no NHL head coaching experience to be an NHL head coach. This time, the lucky fellow is former Capital Adam Oates, who was the subject of a Sports Illustrated feature back in 2001, when the Caps won the Southeast Division title, only to be knocked out by the Penguins in the first round under soon-to-be-fired Ron Wilson.

I'll pause here so you can deal with the repressed memories.

OK, now that you've done that, some of the best bits from that article are after the jump.

Oates developed his passing fancy while sitting around the dinner table as a boy in Weston, Ont. Adam's father, David, grew up in the northwest of England idolizing soccer star Stanley Matthews, the Wizard of Dribble, who's widely regarded as the best English footballer ever. David told Adam vivid tales of Matthews's feats, all of which pointed up the fact that the soccer star made his name as a divine passer who rarely scored. When Adam started playing hockey and lacrosse, David implored him to "be like Stanley-unselfish."

Oates runs through four dozen black Sher-Woods a month, and the ones he tosses away after a single heft (about half, simply because he doesn't like their feel) are spared his indelicate touch. "There's no science to it," Oates says of how he shapes his sticks. "I take each one, go to work on it and hope I can make it feel how I want it to feel."

But the very best part of the article was the photo that accompanied it. Presenting, Adam Oates, Private Eye 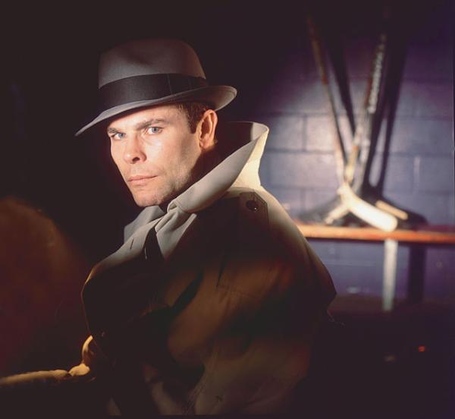