Nationals Unveil New Jerseys, And They Look ... Largely The Same

Share All sharing options for: Nationals Unveil New Jerseys, And They Look ... Largely The Same

The Washington Nationals unveiled some new jerseys, and this is what they look like: 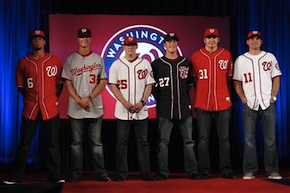 All the analysis I can squeeze out of the minor changes the organization made, after the jump.

First the white home jerseys. Here's a good look at what the jerseys looked like last year. So the team just replaced the Nationals on the front with the curly W logo, and moved the numbers over to the other side of belly. They also added the red lines down the middle for accents and a patch on the shoulder. The team also removed whatever gold accents they had, which is a good move in my opinion.

The away jerseys look pretty much the same.

The red and blue alternate jerseys are both nice, if not very different then their predecessors. The blue jerseys are different because the red white and blue logo used to be the letters "DC" but is now the curly W.

The biggest change in these jerseys is a commitment to the curly W logo over everything else, which I really like. You don't need the home jerseys to say Nationals on them, we know who the home team is when we're watching a game in D.C.. The curly W is the best logo option the Nats have had, and judging by the amount of flat brims I've seen around the district, the most popular.

Not sure if these changes make it worth a new purchase from the team store. But if you never had a jersey in the first place, definitely worth picking one up.