Share All sharing options for: MLB Playoffs: Bryce Harper Roots For The Yankees

Bryce Harper, the Washington Nationals' phenom, is a self-proclaimed New York Yankees, Dallas Cowboys, Los Angeles Lakers and Duke basketball fan. He's essentially a front-runner in his sports fandom, rooting for the teams many of us hate. Therefore, with the Yankees playing a key elimination game in the MLB Playoffs against the Detroit Tigers on Thursday night, Harper did what many Yankees fans do: cheer on his team.

Tweets below the jump are via Nats Enquirer. 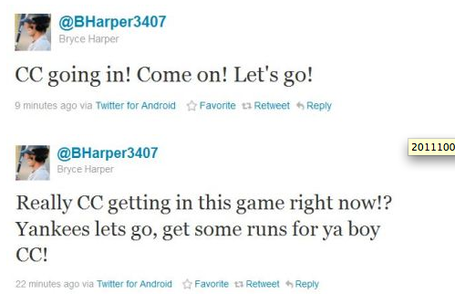 This obviously bothered a few Nationals fans, so Harper ended up deleting the posts. Maybe he came to his senses, or maybe the Nationals or someone else told him to cut it out. Either way, that didn't stop him from firing off one more tweet defending his actions. 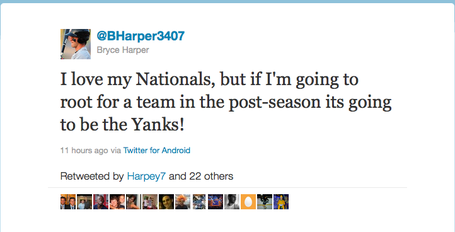 That seemed to calm the masses for a while. Eventually, Harper's favorite team lost, forcing him to commiserate with LeBron James. I guess Bryce can now focus all of his rooting passion back into the Nationals.