Wilson Ramos Kidnapping Gets Ignored Due To Penn State Scandal

Share All sharing options for: Wilson Ramos Kidnapping Gets Ignored Due To Penn State Scandal

On any other sports day, the news of Wilson Ramos being kidnapped in his native Venezuela would be the biggest story of the day. Of course, Wednesday was not a normal day in the sports world, due to the Penn State scandal, the decision to fire Joe Paterno and the subsequent rioting afterwards.

Because of that, ESPN chose to devote their late-night programming almost exclusively to the Penn State saga, with a quick mention of the NBA lockout and college basketball at the end. Right or wrong, this was something several local media members and baseball writers didn't like. 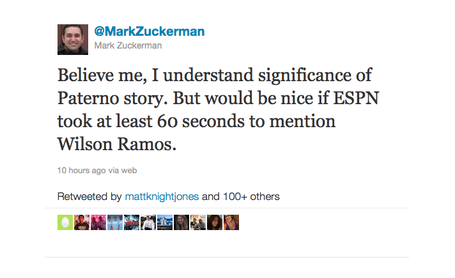 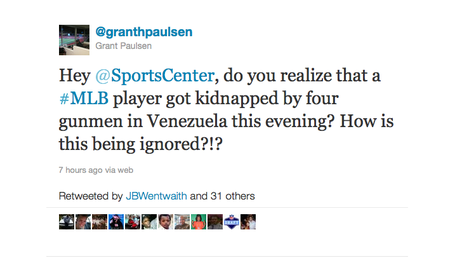 That's just a sampling of angry comments by prominent media members. It's also pretty legitimate. Nobody is suggesting that the Ramos kidnapping is more important than Paterno, but to go an entire night show without mentioning it at all is pretty poor news judgment. Thankfully, the morning edition has mentioned it several times, but that's probably too late.

Wilson Ramos Rescued In Venezuela After Being Kidnapped