Wilson Ramos is now safe and sound after being rescued in Venezuela, but before the news broke, many Nationals fans convened at Nationals Park for a vigil. Here's our live report from an attendee.

On a cold, windy Friday night in Natstown, a large number of fans gathered at the Center Field Gate of Nationals Park to pay their respects to Washington Nationals catcher Wilson Ramos who was kidnapped at gunpoint from his home in Venezuela two days ago.

The atmosphere was very positive and uplifting as many fans cheered for No. 3. Fans brought signs, shirts, and even stuffed bears in honor of Wilson Ramos. The media appeared to have taken some time off from reporting about Joe Paterno's firing from Penn State as various news outlets like WJN 13 in Baltimore, ABC, Fox, and the Washington Post all attended to interview fans. The Washington Nationals organization provided its own support by allowing these special event to take place at the Center Field Gate and also provided free coffee and hot chocolate to those who attended. This served as a great way for the Nationals to lend their support whilst remaining low key at the request of authorities. 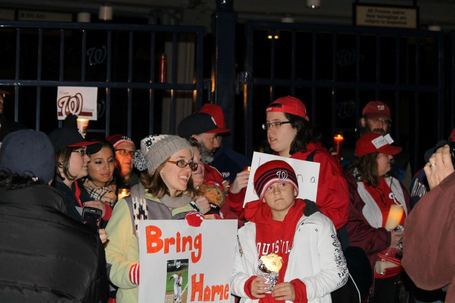 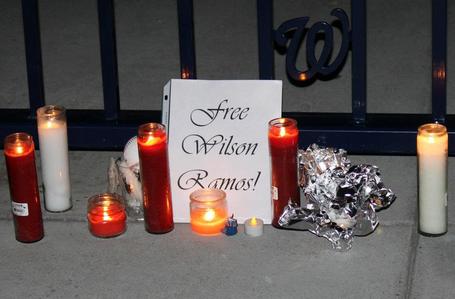 The event began as many Nationals fans came together as a community in honor of Ramos. Ramos' walk-off homer against the Seattle Mariners served as a very popular topic among those attending. Everyone was gathering around one person's iPhone to watch the video clip. The vigil itself began as a group of fans worked together to form a "W" in
candles in honor of Wilson Ramos with the Venezuelan flag displayed right above it. Following this was a speech given by the organizer of the vigil, Alicia Durfee, thanking everyone for coming out and giving a brief speech about Ramos. She then opened the floor to anyone who had something they wanted to say. A total of seven people came up to
share their stories regarding their experiences with Wilson and their hopes for his safe return. After the seven people were done, Alicia Durfee shared her own Ramos story.

"Wilson Ramos is one of my favorite players, said Durfee. We, as Nationals fans, become very attached to our players since the Nationals to do not have the biggest fan base. It feels as if they are family. I was sad, scared, and confused when I heard about what happened. I spent my time reading articles on the internet hoping to find information while listening to sad music. Someone on Facebook suggested that we hold a vigil in honor Ramos. I made an announcement on Twitter and, next thing I knew, I was organizing the whole event. We had a great turn out for such a great player and person. I have always wanted to make a difference and now I know that I have." 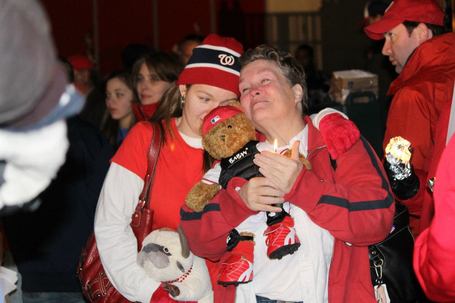 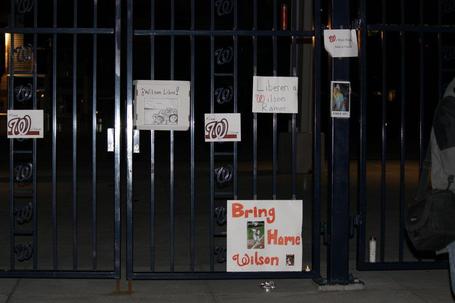 All of this was followed by a very emotional minute of silence where prayers were said, tears were shed, and hopes were held high. To end the event, everyone gathered together as a big group to pose for a picture to show his family how much we as Nationals fans and human beings care about Ramos. This vigil was not just about a rising star
in Major Leage Baseball, it was about a great young man with great talent who has always been dedicated to his fans by interacting with them, signing autographs and being a positive member of the Nationals community.

We miss you Wilson and are overjoyed that you have been rescue. We await your eventual return to the US. 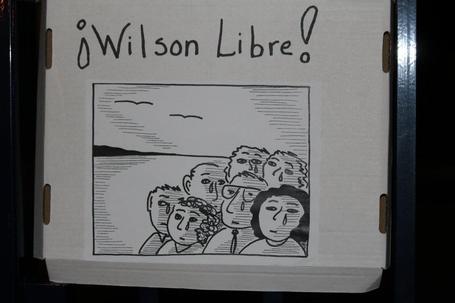 Wilson Ramos Rescued In Venezuela After Being Kidnapped