The Washington Nationals gave up a lot of prospects to the Oakland A's in acquiring left-handed Gio Gonzalez in a 4-for-2 trade on Thursday. It has led to plenty of people asking who Gonzalez is and if the Nats were willing to part with A.J. Coles, Derek Norris, Brad Peacock and Tom Milone, does Gonzalez have some sort of superhero abilities to lead Washington to the playoffs and beyond?

Probably not. It is doubtful he can shoot lasers from his eyes and stop speeding trains. He is only projected to be a #3 starter in what has turned into a scary rotation with Stephen Strasburg, Jordan Zimmermann, Chien-Ming Wang and John Lannan or Ross Detwiler. He might not have super powers, but Gonzalez certainly hangs out in good company.

From the photos on his Facebook page to a website documenting Gonzalez's time at a Marvel convention of some sort, it is safe to assume the new Nationals pitcher is into comic books and here he is posing with Marvel superhero Iron Man. 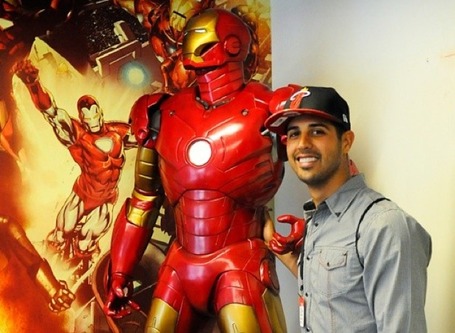 Welcome to D.C., Gio. The Washington Monument is a tough building to leap in a single bound, but we are sure you are up to the task.

(Tip of the cap to the Nationals Inquisition)