Livan Hernandez, And The Easiest Contract Negotiation Mike Rizzo Has Ever Had

Share All sharing options for: Livan Hernandez, And The Easiest Contract Negotiation Mike Rizzo Has Ever Had

He's not always the starting pitcher for the Washington Nationals; but when he is, he prefers to operate in the 85-mph hour range. For that reason among many others, Livan Hernandez is one of the most interesting men in the game of Baseball. 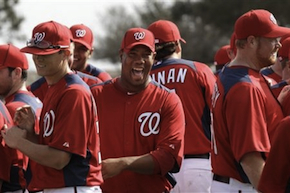 But his velocity and his presence on the Mound are only a couple of the things that make him so interesting. According to Thomas Boswell of the Washington Post, it is loyalty that defines Livan Hernandez. That loyalty was on full display during Livan's contract "negotiations" last August.

Last August, Livan Hernandez walked up to Nationals General Manager Mike Rizzo in a hotel lobby and handed him a slip of paper, the kind you find by the phone in your room. A number was written on it.

The number written on the paper was $1 million.

Livan Hernandez was having one of the better seasons of his career, and probably could have earned much more money had he chosen to go about contract netotiations like most baseball players do. But it isn't the money that is important to Livan Hernandez. It is being a part of a team that needs, in a City where he wants to be and with teammates who he truly enjoys being around. For him, that is where the true value lies in his contract.

The whole profile about Livan Hernandez is a must read, because he is truly one of the more interesting personalities in the game of baseball. His approach to contract negotiations is as unique and humble as his approach to the rest of his life. In a world where Carmelo Anthony tips his hat to himself for forcing his way out of a city he doesn't want to be in even though he is still under contract, Livan's approach is refreshing.

He's made plenty of money in his career, but he wants to spend the end of it in a place where he feels wanted. And that makes a $1 million contract worth so much more.