Share All sharing options for: Jayson Werth Sounds Kind Of Bitter That The Phillies Couldn't Re-Sign Him

The Phillies didn't elect to extend Jayson Werth while his was in Philadelphia, and the Nationals decided to sign him to a 7-year, $126 million contract. But I always wondered if I wished he had the opportunity to stay in Philadelphia. I mean, look how shifty he looked during his introductory press conference. 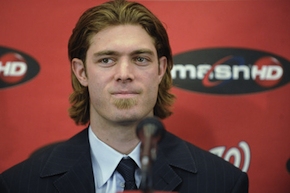 He's got those Scooby Doo bad guy eyes. We'll never know exactly how he feels about leaving in Philadelphia but he certainly sounded kind of bitter about it.

According to an article Paul Hagan at Philly.com, Werth made some interesting comments at spring training recently about the Phillies acquisition of Cliff Lee.

"They ended up paying him a lot more than they would have if they’d signed him the year before. Then we would have had him. Chances are if they had signed him before they traded him, it probably would have made it a little easier to sign me."

Now, Werth isn't saying that he would rather be in Philadelphia, but it sure sounds like he has thought a lot about the circumstances that could have made that possible. I think we all knew that Werth pretty much came here for the money, I'm just curious about what size contract could have kept him in Philly, and exactly how much more the Nationals had to pay to get him.