Bryce Harper Is As Good As He Is Hyped To Be

It's hard for both writers and fans to separate the hype from Bryce Harper, but perhaps that separation does not need to happen. Harper is that rare player that is both, and Natstown should be excited about it.

Share All sharing options for: Bryce Harper Is As Good As He Is Hyped To Be

Trying to sit down to write an article about Washington Nationals top prospect Bryce Harper is a tough thing to do. I almost want to compare it to trying to attempt to write a biography on Jesus and the conflicts that comes with it. There was, of course, the man known as Big J, but can you separate the man from the phenomenon? Is it even possible at this point? It is the conundrum that plagues most baseball writers right now. Curse the kid (not really).

It seems like almost everyday the news coming out of Hagerstown are things of legends (or miracles). An ongoing 23-game on-base streak, a recent impressive 18-game hit streak, a .381 batting average, a .458 on-base percentage, a .683 slugging percentage, nine home runs, 31 RBI, 11 doubles, six stolen bases and Sally League Player of the Week honors. Throw in the fact that there is more consistent offense in the chambers of Congress than anywhere in the Nationals' daily lineup, and it just causes more of a frenzy. More and more, it looks as if a star has risen over Nationals Park and shines down into the bullpen to proclaim the birth of a savior.

Then, you remember he is just an 18-year old kid. He should be getting to graduate high school, not graduate to the next level of Major League baseball development. You remember he isn't hitting the ball off in D.C. against seasoned, professional hitters. He is playing baseball in the no-mans Land of Hagerstown, with those who have yet to be purified in the fields of professional ballparks across the country. Many have been a Minor League hero; few have entered baseball myth. 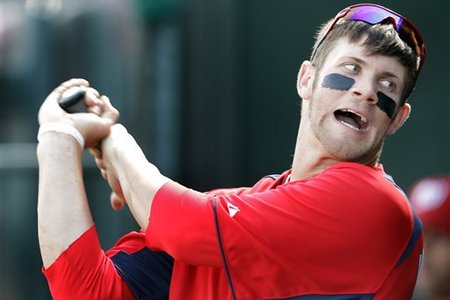 As a writer, you want to get excited, you really do. You want to make your editor drool and send your readership (up) and into the orgasmic excitement of baseball ecstasy. Unfortunately, so much is working against Harper. So many things don't work out for young prospects. Plus, this is the Washington Nationals we are talking about. Nothing seems to ever work out for the terminally "lowly" Nationals. You need to keep a story on Harper on an even keel. You say to yourself: "you need to report the facts, not get caught up in the hoopla and pomp that is surrounding him."

Writing these words now, I am having this very conflict. It was similar to what happened with Stephen Strasburg just last year, but there was this insane confidence that Strasburg was the real deal - and he is. It is hard to argue that, before his injury (baseball Gods be blasted: forgive me Father for I have sinned) he did not live up to the hype. With Harper, it is different. HIs age, possible maturity issues, his short time playing college ball, his switch from catcher to outfield, his adjustment to professional playing and professional life are all things he will have to confront and overcome.

Then I remember Spring Training. I had the unique opportunity to spend 30 days in Viera, which offered me the opportunity to technically spend 30 days watching Harper as he begun his professional baseball career. In those days I saw an excited, but nervous kid prone to over extending himself, being overly aggressive and full of that need to try to prove he belonged. His style was vicious and raw, he made rookie mistakes. He was, for a lack of a better term, a snot-nose loose on the ropes.

Reading about and watching Harper two months later, and already there has been a tremendous metamorphosis. He is still aggressive, but he has harnessed it. Gone is the kid with the eyes the size of dishware taking in everything all at once. In its place is focus, unique for a young mind. Harper is no longer in need to try and prove he belongs, because he knows he does. His play was terrific in Spring Training. Right now it is almost mythic. He has grown and evolved before our eyes and in the stat books. He has conquered most of the odds so far and faced challenges in everything from his on-field abilities to his character image. His journey is far from over, but as of now, the boy, the man has lived up to the hype so much that he is the hype. So far there has been no way to separate one from the other. 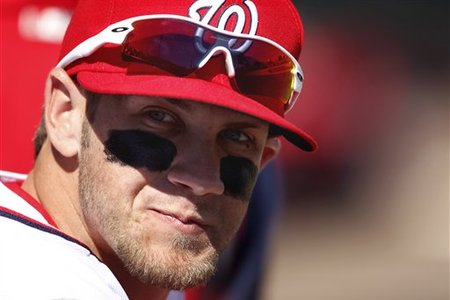 So after many hours of thought and deliberation, I have come to the conclusion I won't make the separation. In a season where the Washington Nationals have not generated excitement in the big game, Harper has become the game. Nationals fans continue to watch and gain a bridled, collected excitement about the young phenom. You should be excited Natstown. It is time to stop holding the excitement and the hype in.

It is time to unleash it.