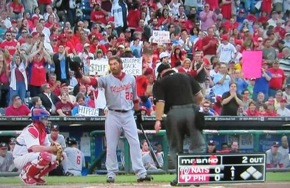 As expected, all eyes are on Washington Nationals right fielder Jayson Werth in the game between the Washington Nationals and Philadelphia Phillies. So far the scruffy outfielder hasn't disappointed either side of the crowd. In the first inning, Werth approached home plate with a bat in his hand for the first time in Philadelphia as a member of an opposing team, and the fans responded with a score of boos and jeers.

However, Werth surprised the crowd by tipping his hat twice. At that point, the boos melted suddenly into cheers. Werth then set in for his at-bat against pitcher Cole Hamels and drew a walk his first time up. The boos returned as he went down the first base line. Werth then stole second and had a little laugh with Jimmy Rollins after they had a slight collision at the bag. Unfortunately, Adam LaRoche struck out on the next pitch of the at-bat to end the inning.

Phillies fans are in mass in right field with signs, insults and boos, but again Werth showed class by tipping his hat to the fans in the outfield, which cut through the negativity. The boos more and more give way to cheers and respect. That is, until Werth signaled to the Curly W on his cap and the boo birds returned again in full force.

Say what you want about Jayson Werth, his mega contract, his stats and his lack of shampoo, but no one can deny his showmanship.