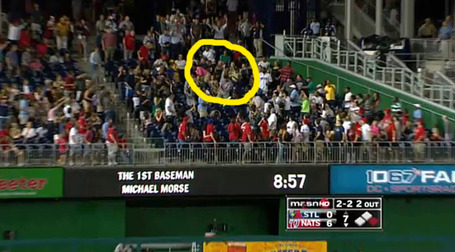 Nationals first baseman Michael Morse blasted a pair of home runs during Wednesday's win over the Cardinals. The first one gave the Nats a 1-0 lead, and the second one traveled 445 feet to left center field, plating Laynce Nix to run the score to 8-0.

I doubt he'll maintain this pace for much longer, but Morse's strong start coupled with last year's solid performance means we can expect solid production out of him for the foreseeable future. So far he's been everything Nats fans have hoped Jayson Werth would be this season. He even has a decent beard to go along with his impressive numbers.