The Nationals may have a losing record, but the good news is that their young players appear to be playing better than expected, and that's what really matters.

I admit: I got caught with some bad timing on this one. When the Washington Nationals fell to the Philadelphia Phillies on Monday, despite tagging Roy Halladay for three home runs, I figured they would also play poorly enough to end the series in the same bad mood they entered it. Instead, the Nationals pounded Cliff Lee, then got a series win with a classic 2-1 victory on Wednesday. So now, when I write this optimistic article about the team, it will look, well, opportunistic.

So you'll just have to take my word for it that this was something I was thinking about as far back as two days ago. Or don't. Either way, here we are.

Anyway, as we jump past the Memorial Day marker of the MLB season, I think we need a reality check on the struggles of the Washington Nationals. Granted, the Nationals' series win over the Phillies came at a time when pretty much nothing was going right. The Nationals had lost 10 of 12 games coming into the game on Tuesday, and tempers were flaring. Jayson Werth, the $126 million man who had an abysmal April, had already spouted off about the need for things to change. Jim Riggleman, managing without a long-term contract, had already moved squarely onto the hot seat and was picking battles against anyone who felt he was a "small-ball" manager. Mike Rizzo, meanwhile, was away scouting the draft and giving ridiculous interviews where he thought the team was much better than it actually is.

The Nationals had essentially faded back into being one of the worst teams in baseball, and nobody liked it. And yet, as all this angst was happening, people were forgetting one key thing: the players that really matter for this team this season were actually playing pretty well. 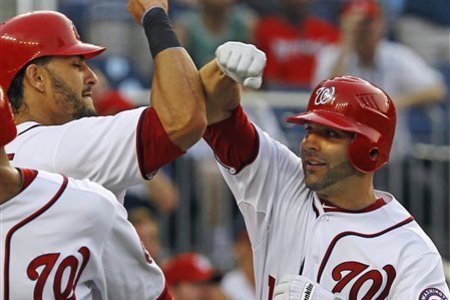 Back when this season started, I wrote about how the success of the 2011 Nationals had nothing to do with wins and losses and had everything to do with the development of key youngsters. Ultimately, this year was all about guys like Danny Espinosa, Ian Desmond, Drew Storen, Wilson Ramos, Jordan Zimmermann and (though he's not young) Michael Morse. Everyone else on the team was essentially either window dressing or a given. We know Werth is going to be here for a while. We know Ryan Zimmerman is awesome. We know pretty much everyone else is a veteran on a short-term contract that probably won't play a huge role in the Strasburg/Harper era.

Those six, though, had a lot to prove. If the Nationals are to have enough complementary pieces to be a contender in the future, those six needed to be them. So how are those six doing?

All things considered, that's three major positives, one moderate positive, one "I can live with that" and one disappointment. Prior to the season, I'd absolutely take those odds. The emergence of Espinosa, Ramos and Storen in particular is a really good sign for the Nationals' future.
Sure, the Nationals stink. But they stink because Ryan Zimmerman is injured, Werth wasn't hitting in April and the veterans Mike Rizzo has brought in on short-term contracts (except Jason Marquis and Laynce Nix) have been bad (seriously, Matt Stairs?). Very few of those factors will be there in the future, when Stephen Strasburg is healthy and Bryce Harper is ready for the Majors. The ones that do matter -- i.e. these six players -- are, by and large, exceeding expectations.
I realize that Nationals fans hate to look towards the "future" because doing so evokes memories of Stan Kasten's ill-conceived "Plan." But once Strasburg got hurt and Rizzo decided (correctly) that Harper wasn't ready yet, the 2011 season became about the future, for better or worse. If you look at the Nationals' season through this lens, and not through wins and losses, this season has been a success.