Share All sharing options for: Nationals Vs. Diamondbacks: Esmerling Vasquez Ejected For Throwing Behind Danny Espinosa 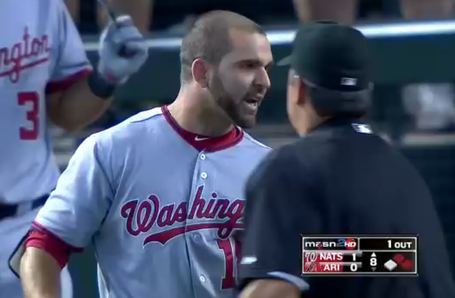 And you thought the Nationals and Diamondbacks were done hitting each other. Think again. Two innings after Jason Marquis was ejected for hitting Justin Upton in the back, the Diamondbacks got retaliation. Esmerling Vasquez threw a pitch behind Danny Espinosa and was immediately ejected, along with Diamondbacks manager Kirk Gibson. Video is here.

Espinosa was understandably angry, as was everyone else on the Nationals. But nobody was madder than Ray Knight on the MASN broadcast. Knight had been fuming all game, and he finally got it all out after Espinosa was hit. First, in response to Bob Carpenter noting that Espinosa was mad at catcher Miguel Montero, who still had his catcher's gear on, Knight said, "Gear on or no gear on, it would be me and him right now. I don't give a flip." Then, once the replay was showed, Knight stuttered before finally exclaiming, "Throwing the daggum ball behind somebody? Give me a flipping break here." The only thing that would have made it better is if Knight didn't stop himself from cursing.

The two teams next play on August 22 at Nationals Park. Get your tickets now!