Stephen Strasburg, A Birthday And Remembering Why We Love Baseball

Our Nationals' correspondent was set to celebrate a quiet 31st birthday by attending the Potomac Nationals' game on Friday. Then, Stephen Strasburg decided to drop in and show why he is the best present of all.

Share All sharing options for: Stephen Strasburg, A Birthday And Remembering Why We Love Baseball

WOODBRIDGE, Va. - Friday was going to be the perfect 31st birthday.

My 30th birthday was one for the books, an epic journey into three decades of madness that started in a barn and ended in a field sitting on the back of a Ford F250 blitzed and dreaming while watching a bonfire burn late into the night. It would be hard to follow that one up, but I was determined to try to make my 31st memorable as well. I had it all planned out: swing up to Northern Virginia via train, hang out with family, then hit Woodbridge for the Potomac Nationals game at Pfitzner Stadium and Ian Desmond Bobblehead night. It was going to be perfect. Then, Stephen Strasburg ruined it.

I still can’t believe how inconsiderate the Washington Nationals were in naming the August 12th Potomac game against the Myrtle Beach Pelicans Strasburg’s second rehab start. It was a total kick in my nuts. I had purchased the tickets two weeks earlier with no knowledge of Strasburg even having the possibility of being there. I got great seats too, three rows from the field just in front of the pitcher’s mound. Strasburg shouldn’t be pitching in Single-A ball. He should be pitching in the Majors or in a league on the moon, but no he was coming to Woodbridge to burn my plans on the anniversary of the day I gave my mother the worst eight hours of her life.

What was going to be an easy-going, birthday bobblehead bonanza quickly disintegrated into utter chaos. Gates to the Pfitz were to open at 5 p.m., but soon word came down the wire people had already started to line-up at three. And for what? The chance to see a guy throw heat like no other pitcher in recent memory? To fantasize about the future of the organization? To see the incarnation of the hopes and dreams of an entire baseball culture? Humbug. I wanted a birthday bobble, damn it!

By the time I arrived, the 1,000 available Desmond statuary were long gone and moving through the Pftiz was like battling bottleneckers on 395. To say I hit my totally awesome seats a bit disappointed was an understatement. The impetuous actions of this team was astounding. Obviously they either had no idea I would be in attendance or just didn’t care!

When Strasburg finally appeared walking down the right field line to the outfield with a security guard in tow and hundreds of Nats fans rising to their feet to applaud, my joy was there, but tempered. There he was: the Prince of Peg, the Hero of Heave, the Scion of Smoke Throwing, the Chucking Christ. He performed warm ups and stretches away from the rest of the P-Nats. He seemed to be in his own zone. The only time he seemed out of it was when he fumbled with his jersey that seemed to constantly become untucked and cause him some irritation.

After the anthem was sung (by a guy who was singing it an octave too low at points) and Strasburg prepared to take the mound for the first time, my mood was to the point it might be inconsolable. My birthday was ruined, drowned by the joy and excitement of others who had been anticipating this moment for over a year since it was announced Strasburg would undergo Tommy John surgery. The shouting, the cheers, the blasts from the Pfitz friendly vuvuzelas gave me a headache. Nothing looked like it could save my night.

Until Strasburg threw his first pitch. 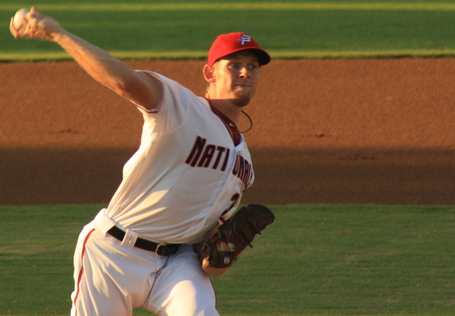 The sound of that ball hitting the warm, dusty leather of the catcher’s mitt; wooo-weee! Be still my beating baseball heart! It was the sound that every baseball fan cherishes. The phenom cut through his Single-A competition like butter. He slammed that ball into catcher Sandy Leon’s glove at 96, 97, 98 and at times even 99 miles per hour. Of the 33 jaw-dropping pitches he threw, 26 were strikes, and the crowd loved it. Strasburg makes throwing a strike as exciting as hitting a home run.

He issued no walks and struck out five. He gave up two hits, but the first one was probably an umpire error. From my vantage point, the batter looked out, but the umpires were having a little trouble doing their job Friday night. The only time Strasburg looked a little rusty was in the second inning of his three-inning stint. There came a point where he actually threw back-to-back balls and he didn’t look happy, either with the call or himself. But he rebounded and finished his three innings.

Afterwards, the crowd gave him a standing ovation as he moved back to the bullpen area to collect a few more pitches and then into the locker room. I too had to get to my feet and give him props. He looked good. He looked strong. It felt really good to see him on the mound again. He is not 100 percent Strasburg, not yet, but he is insanely close and I imagine his next few rehab starts will either be equally or more crazy than Friday night in Woodbridge.

For three innings, Strasburg made me forget about the hassle of the day and the lack of a bobblehead. Eventually the crowd lessened after he left the game and some blessed readers of my blog acquired a bobblehead for me (thanks guys).

But Strasburg, you beautiful, boorish mangler of birthday plans, you gave me the best birthday gift of all: the reminder of why I am a baseball fan in the first place.