Here's a link to the video of Jonny Gomes' walk-off hit-by-pitch, which is described more mundanely as his "walk-off walk." As you can see in that screenshot, Phillies reliever Brad Lidge threw a slider that went further and further inside, and Gomes stood there to take the punishment.

An argument could be made that Gomes should have done more to get out of the way of the pitch, but that argument would only be made by Phillies fans and those who believe Major League Baseball is like Little League. The fact of the matter is that Lidge and the Phillies put themselves in that position by giving up Ian Desmond's game-tying home run, then having the bases loaded with Gomes at the plate.

Besides, how else will we be able to see this iconic Lidge screenshot? 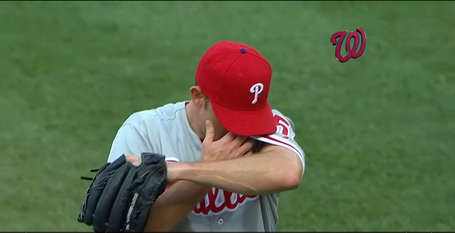 Yup, dude. You just allowed your team to lose by hitting a guy. There's crying in baseball when you do this.