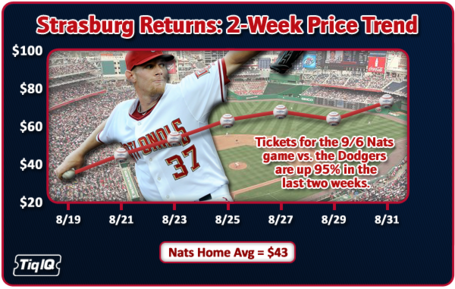 Want to get tickets to see Stephen Strasburg's return? You might want to hurry. Our friends at TiqIQ sent along this graphic, which shows the price hike in the average ticket for the September 6 game against the Dodgers. As of last night, the average ticket cost $76.39. That price has gone down a bit to $71.84, but that's still pretty expensive.

It's not quite as insane as the ticket spike for Strasburg's debut last season, which averaged $86.72 according to Dan Steinberg, but it's still pretty large.

So yeah, you better hurry to get these things, especially because the cheapest ticket on TiqIQ right now is $50. That's as of 1 p.m. on Wednesday, or about 16 hours after Davey Johnson confirmed that Strasburg would start on September 6 barring any setbacks.

It remains to be seen how much of a draw Strasburg is going forward, but this should provide all the evidence needed that his mere presence is a draw right now.