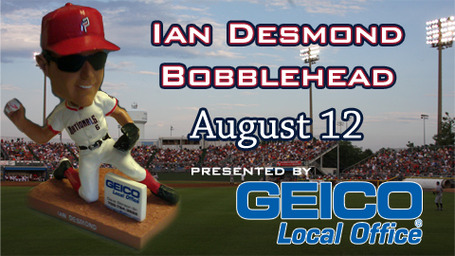 Come for Stephen Strasburg; stay for an Ian Desmond bobblehead. That's at least what the Potomac Nationals are implying by having Strasburg pitch for them this Friday.

The Washington Nationals announced that Strasburg would make his second rehab start in Potomac on Friday, moving him up one level of the minors. In the process, they ensured that Strasburg's first start would overlap with Ian Desmond Bobblehead Night, a previously-planned event where the first 1,000 fans will receive the image you see above. It shows a slick-fielding Desmond, which many would argue is a truly rare thing.

The blurb for this giveaway on the P-Nats' website is kind of amusing.

August 12th at Pfitzner Stadium is Ian Desmond Bobblehead Night, presented by the Local Geico Offices of Dave Stinson, Sr. The first 1,000 fans through the gates for the Friday night game against the Myrtle Beach Pelicans will receive this outstanding collectible. Desmond, who earned the Washington Nationals starting shortstop job out of Spring Training before the 2010 season,spent parts of three seasons with the P-Nats. Desmond firmly established himself as a cornerstone of Washington's future in 2010 when he hit .269 with ten homers, 65 RBIs and 27 doubles.