Share All sharing options for: PHOTO: New Poles Appear On Nationals Park First Base Side - UPDATED

While the Washington Nationals are away playing a series in the Big Apple, it seems someone has been doing some odd home improvements at Nationals Park.

Four strange poles appear to have been added to at least the first base side of Nationals Park. They seem almost like flag poles with pulleys, but they do not seem to extend over the dugout. The poles are planted actually in the stands and not on the field. What future purpose they are going to serve is unknown at this time. If it is a new netting system to protect fans or the handicap section of the Park, then it will probably be the first of its kind at a stadium, but one thing is for sure: more poles and more nets equal eyesores and loss of sight lines.

The mystery has been solved, but a lot of questions remain about the mysterious poles. Our friendly neighborhood Bog writer Dan Steinberg has discovered that the Nationals are indeed installing nets to be hoisted up during batting practice. This is apparently the Nationals response to an incident that involved a fan falling to his death while attempting to catch a ball thrown from Josh Hamilton this summer- in a completely different stadium and completely different situation that would involve some sort of netting.

The most concerning question remains on whether the poles are removable or not. If not, there is going to be a lot of annoyed Nats fans and a major Nationals Park eyesore that doesn't involve Doug Slaten's relief pitching.

UPDATE 2: The poles will be removed before games, according to Steinberg. 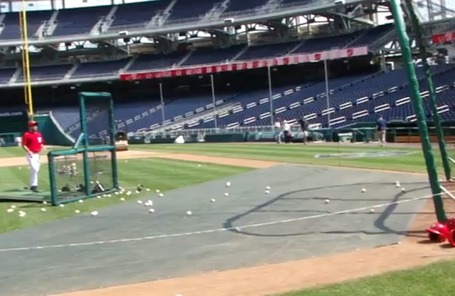