Jose Reyes and the New York Mets probably hate Rick Ankiel right now. Heck, I would too if I were them. The Nationals topped the Mets, 2-0, on Wednesday night, and it was all thanks to Ankiel's heroics in the field.

First, there was The Throw. With a runner on second in the fifth inning of a scoreless game, Reyes poked a single up the middle. Josh Thole starting running towards home, but was gunned down when Ankiel's throw reached the catcher in the air. Thole tried to slide, but there was no way the Nationals would let that play go to waste.

But it gets worse for Reyes. In the ninth inning, he lined a ball to the gap. Had it dropped, it probably would have been a triple. Instead, Ankiel made a diving stop to preserve the win for the Nationals. Here's video of that play. Video of the throw, plus a screenshot of the diving catch, are below the jump. 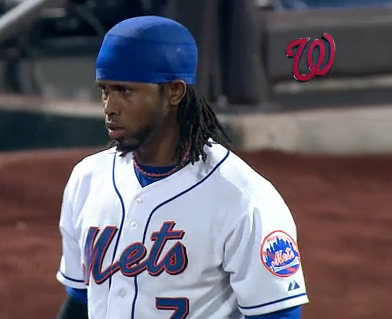