With Minor League baseball season at its end and the playoffs in full swing, many players move on to other jobs and passions while dreaming of what is to come next season. Some go golfing, some spend the off time with their families and some work off season jobs.

Harrisburg Senators third baseman Adam Fox of the Washington Nationals Double-A affliliate goes deer hunting- and he takes it very seriously. This is obvious from a photo he tweeted of the hunting gear he plans to use this deer season. It takes up a whole picnic bench. Very impressive.

Fox isn't the only player in the organization that spends time in the woods and supporting nature conservation. Both Nationals first baseman Adam LaRoche and starting pitcher Jordan Zimmermann are both known to don the Mossy Oak and hit the woods looking for the big bucks. Judging by how some other Nationals players dress, you can probably say there are a few more closeted hunters among them. 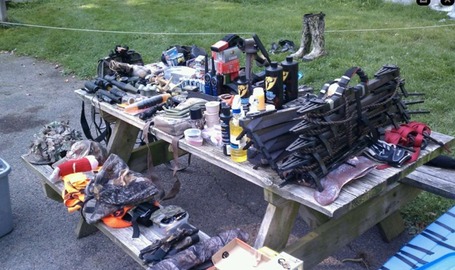 Wow. This man is passionate.