Anybody watching the carnage from College Park can surely use something to smile about. How about Jayson Werth wrestling giant-headed President mascots during the fourth inning of Saturday's Nationals game. Werth, along with help from Rick Ankiel and the entire Nationals bullpen, tries to help President Teddy get his first ever win. Alas, Teddy remains winless and Werth himself got the victory.

Video after the jump.

This video is fun and makes me like Jayson Werth. The team has had a good year with significant improvement in most facets. Werth didn't have the year we all hoped, but it's good to see he still has a sense of humor about things. All year, the informed baseball crowd would say how Werth has value beyond his statistics. Maybe this is an example of that, it certainly seemed like the team enjoyed it. Plus, Werth showed some skill in his takedown of our nation's first president. Is that a nose pinch? 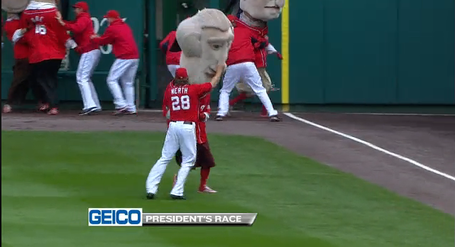 If there ever is a brawl, perhaps one that matters with an October appearance on the line, we now know Werth has what it takes. Maybe he looks like that wrestler for a reason.

Good for Werth. Bad for Teddy. 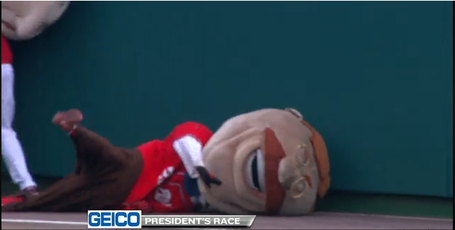