The return to the big leagues of Washington Nationals pitching phenom Stephen Strasburg was expected to draw a large crowd to Nationals Park on Tuesday night , but then Mother Nature decided to step in ruin everyone's plans. Reports circulated that heavy rain was sure to deluge the ballpark, and there was no way the game would be played. But lo and behold, the skies cleared enough for Strasburg to take the hill at 7:05 P.M., just as scheduled. Though the return of the fireballing righty was not delayed after all, the wacky weather greatly diminished the crowd that would see him pitch in a Nationals uniform for the first time in 368 days. Via @cmasisak22 comes this shot of Nationals Park as Strasburg makes his triumphant return to the hill: 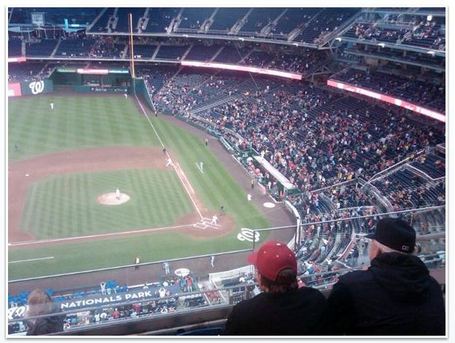