The Cardinals had that feeling, that look, of a team that was going to do it again. They made the playoffs on something like a court order, and they sailed through the Wild Card game after one of the better-fielding teams in baseball decided to kick the ball around. And in Game 1, they built a lead by doing little more than standing around and watching Gio Gonzalez melt down. They didn't have an extra-base hit, and they pitched around bases-loaded jams. They were going to do it again.

But the Nationals took Game1 away, winning 3-2, and proving the Cardinals didn't own the monopoly on good fortune.

The game started innocently enough for the Nationals, with Matt Holliday stranded after a two-out walk in the first. And in the top of the second, they rallied against Adam Wainwright, with Kurt Suzuki driving in a run with two outs. Wainwright walked Gio Gonzalez after that to load the bases, but Jayson Werth grounded out to short to end the threat.

In the bottom of the second, Gonzalez melted down, walking the bases loaded, and allowing the first Cardinals run to score on a wild pitch. A walk to Wainwright followed, and Jon Jay hit a sacrifice fly to put the Cards up 2-1.

That's where the score stayed. Wainwright settled down, and eventually looked fantastic, as he was the first Cardinals pitcher to strikeout more than nine batters in a postseason game since Bob Gibson in 1968. Wainwright would go 5⅔, striking out 10, and walking three.

In the bottom of the seventh, though, the Cardinals squandered an amazing chance against Craig Stammen, loading the bases on an error, a Carlos Beltran single, and a hit-by-pitch with no outs. That brought up Allen Craig, the Cardinals cleanup hitter to face Ryan Mattheus, just brought into the game. But Craig could only ground to short for a 6-2 force out on the first pitch, and on the next pitch, Yadier Molina hit into a 5-4-3 double play to end the threat.

The Nationals took advantage in the top of the eighth, with Michael Morse reaching on a Pete Kozma error. Ian Desmond followed with a single, putting runners on first and third with no one out. Danny Espinosa laid down a quasi-sacrifice, almost beating it out, and putting runners on second and third. Kurt Suzuki struck out, though, and it looked like the Cardinals were going to do it again.

Then came Tyler Moore. You spend hours thinking about Matt Holliday vs. Gio Gonzalez or Tyler Clippard, going through the potential match-ups in your head, and it's Tyler Moore, pinch-hitting and throwing his bat at an outside fastball from Marc Rzepczynski that decides a game. That's exactly what Moore did, and he looped it into right, scoring two and giving the Nationals the lead.

Tyler Clippard and Drew Storen pitched the eighth and ninth inning, respectively. The Cardinals got a leadoff runner on against Clippard on a Ryan Zimmerman throwing error. Daniel Descalso bunted the runner to second for Pete Kozma with one out, which … okay. But Clippard got Matt Carpenter looking to end the inning, getting him with a fastball that was possibly in the other batter's box. 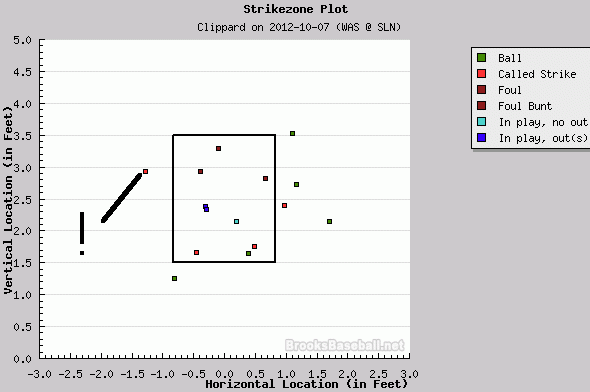 But the call was made, the Cardinals' mini-rally was over, and they went down quietly in the ninth. The Cardinals were 0-for-8 with runners in scoring position, and they left 10 runners on base. So much for that feeling, that look, at least for this game.

The Nationals take a 1-0 series lead, and they'll play Game 2 in St. Louis on Monday night, with Jordan Zimmermann facing off against Jaime Garcia.