The Washington Nationals agreed to a contract extension with third baseman Ryan Zimmerman Sunday, and held an afternoon press conference to announce the deal. In what can only be viewed as a good sign of team camaraderie, Bill Ladson of MLB.com noted many of Zimmerman's teammates attended the presser:

There were 16 #Nats players, includingBryce Harper and Danny Espinosa, who were in attendance for Ryan Zimmerman's press conference.

Of course, only one of those attendees has the sartorial savvy of Michael Morse. After the jump, take a look at Morse's fashion choice (I think many Nationals fans can already guess where this is headed). 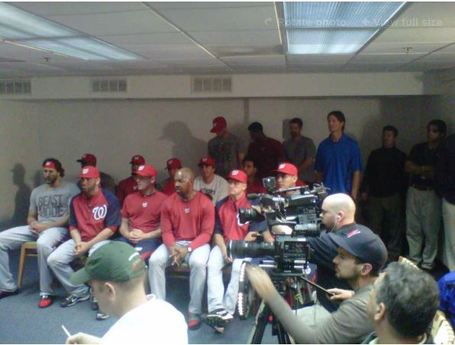 Either Morse has 20 different version of that "Beast Mode" shirt, or it is made of the toughest fabric on Earth and he simply never removes it from his being.

We'll have much more on Spring Training here at SB Nation DC in the coming weeks. In the meantime, check out SB Nation's Nationals blog, Federal Baseball, for more news and notes. And don't forget to visit Baseball Nation, the MLB hub of SB Nation for information from around the league.