Hey look, Washington Nationals third baseman Ryan Zimmerman is just like us. Well, other than being a multimillionaire professional baseball player he's just like us, because he too can't resist the urge to fill out a NCAA tournament bracket when March Madness hits. After the jump, courtesy of Bill Ladson, check out Zimmerman's bracket and how he has fared so far (spoiler: amazingly, Zim did not have UVA winning it all): 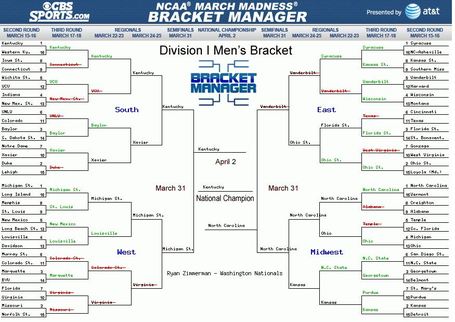 As you can see, Zimmerman had his alma mater making the Elite Eight, but not advancing any farther. Overall, his bracket is in OK shape, though he did lose a Final Four team with the Vanderbilt selection (pulling for those egghead schools, eh Zim?). The Nationals third baseman went chalk with the rest of his Final Four, ultimately picking Kentucky to win the 2012 NCAA Championship, joining a great multitude of bracket participants with that same safe (logical?) choice.

For more on the Nationals, check out Federal Baseball. For the latest news from around Spring Training, check out SB Nation's MLB hub, Baseball Nation.