The home plate umpire for Wednesday afternoon's Duel Of The Aces between Stephen Strasburg and Johan Santana was Larry Vanover.

Vanover has been an umpire since 1993, according to MLB's official website, but has only worked one All-Star Game and two postseasons in all that time. Some might find this significant.

Anyway, Stephen Strasburg did not take too kindly to some of Vanover's ball-strike calls in the first inning of Wednesday's game, and if you look at some of the strike zone charts, it's easy to see why.

See those green squares in the strike zone? One of those should have been a called third strike to Ruben Tejada. Instead, Tejada lined a single back up the middle on the very next pitch. Cue the staredown between Strasburg and Vanover, which was followed by a 26-pitch first inning.

Have you absorbed the injustice writ large in that chart? Good. Now, check out Strasburg's second inning. Look at the location of those called balls from the first inning

What the heck, Larry?

UPDATE: OK, Mr. Vanover, we take back some of the bad things we've said about you. But our lager point still stands. 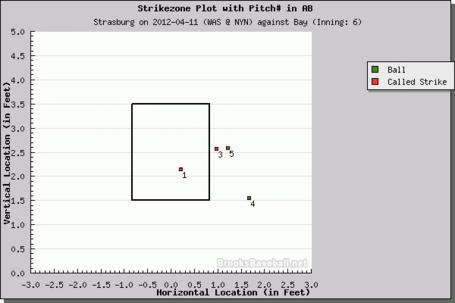