The Washington Nationals take on the Cincinnati Reds on Saturday afternoon at Nats Park, and if the team's early-season success isn't enough to get fans out to the game, the Nationals are enticing folks with the second-best thing: novelty bobble heads. That's right, Washington pitching star Stephen Strasburg has been memorialized in bobble head form, and can be had if fans arrive early enough to the game:

After the jump, check out a sneak peek of the Strasburg bobblehead, courtesy of MASN's Byron Kerr. 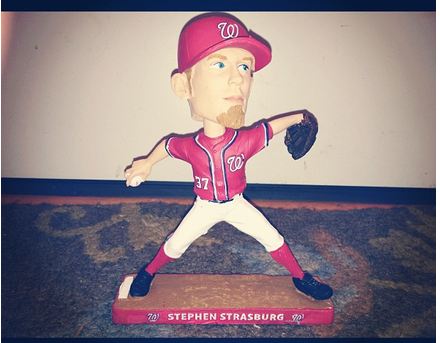 For more on this game and all things Washington Nationals baseball, please head over to Federal Baseball. For a view from the other dugout you can check out Red Reporter, SB Nation's Cincinnati Reds blog. For more on this and every Major League Baseball game you can head over to the SB nation MLB hub page.